Now I know why Pippa didn’t join in our New York partying!

Now I know why Pippa didn’t join in our New York partying . . . and I thought she was just dull!

IT all makes sense now.

They told me they were in New York for a second honeymoon but fun-loving Pippa wasn’t partying to match the celebration.

Now it has emerged that Brian Ormond and Pippa O’Connor are expecting a baby Brippa.

The pair managed to hide their little secret when I joined them and 80 Lotto winners on a trip to Manhattan last week — but Brian has eventually spilled the beans.

“Finally … I can say it … Pippa is expecting our first baby. We’re super excited,” the RTE presenter said.

Sources very close to the couple said it was only a matter of time before they decided to start a family.

The 28-year-old was in flying form as she openly discussed her love for presenter husband Brian.

She spoke to the Herald about juggling her extremely happy marriage and her hectic modelling career.

But the day job will soon be put on hold as Pippa prepares to give birth to a child of her own. Friends of the couple openly joked about how they have often spoke about starting a family.

“Brian and Pippa have made no secret of the fact they want to have kids. To be honest, I think we can expect several. They want to have a big family,” a very close pal told us.

While Brian chose to socialise into the early hours in The Big Apple, Pippa set rumours flying by opting for an early night.

The couple spent four days in the luxurious Sofitel Hotel off Fifth Avenue before heading off to the upmarket Hamptons for a second honeymoon.

They revealed to the Herald their plans to relax for a few days after a hectic schedule filming Celebrity Bainisteoir.

Twitter was buzzing last night when the big news was revealed.

The couple were instantly inundated with messages from fans and celebrities friends wishing them well.

The couple got married last year in a lavish ceremony at The Ritz Carlton in Powerscourt. The build up to their big day was immortalised in RTE’s Reality Bites documentary, Pippa And Brian Get Married. Last month, Brian admitted that he hoped to start a family.

“We would love to have babies and we most certainly will in the future,” the TV star said. “Let’s just say we’re practising at the moment.” It seems all that practice paid off, and the pair are looking forward to the arrival of their first child next year.

Brian already has a daughter, Chloe, from a previous relationship. Brian wrote a song for Chloe called Friday’s Child when she was born in 2000.

Caring for baby sensitive skin can be quite difficult if you’re not sure where to start and want to find the best products, 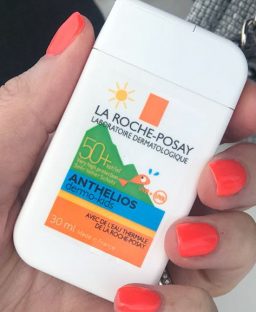 Play Safe In The Sun With La Roche-Posay This Summer

It’s essential to be sun smart all year round, whatever the